Is Jesus a Harry Potter figure? 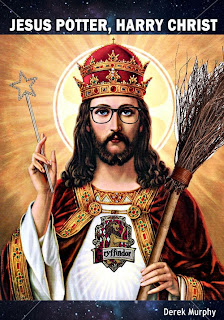 This is the real question posed by a new book to be published in January next year. Not whether Harry Potter is a ‘Christ Figure’ (similar to a historical religious savior), but rather whether Jesus Christ is a ‘Potter Figure’ (a composition of redemptive mythological symbols and philosophies).
"At first glance it may seem that J.K. Rowling’s boy wizard and the crucified Jesus prophet who became the Christian savior have absolutely nothing to do with each other – and yet the unease and sometimes outright animosity between the followers of these two figures suggests otherwise. Harry has been banned, burned, and abused by religious fundamentalists for over a decade. Just what is it about Harry Potter that Christians find so threatening?
On the surface, the conflict appears simple. The Bible prohibits witchcraft absolutely, on pain of death. Consequently, some Christians argue that the popularity of Harry Potter can lead children to accept that magic is OK – if used for the right reasons – and thus lure them into evil practices that lead to damnation. At the release of Rowling’s final book, however, many readers were surprised to discover parallels between Jesus and Harry that, in such apparently diverse world-views, had no right to be there. As a result, recent years have witnessed a revolution in Christian responses to Harry, with many groups, writers and religious leaders praising Rowling’s young sorcerer as ultimately Christian and a clear metaphor for Jesus Christ."
Posted by quedula at 11:50