Rebuttal of the Kalam Cosmological Argument

This comment by Jason Quinn on FB page "Atheism" is the most succinct and convincing despatch of William Lane Craig's pet theory that I have read:-

Again, the premise is completely meaningless until you define the term "existence." What does it mean for something exist?

I'll present a definition of "existence" so as to be able to analyze the above statement.

existence - that which has shape independent of the human mind

So you are claiming that all matter in existence did not exist at some point in the past, ie, it had a beginning. So your theory looks like this: there is nothingness, emptiness, ie, space, and then suddenly there are objects with shape. You go from an empty frame of the movie to one where there are objects. The problem with this "theory" is that you cannot show me the frame of the movie where space converts into objects with shape. The mechanism behind creation is unimaginable and cannot be illustrated. Any "theory" which relies on hidden frames is unscientific and irrational.

Again, we need to define existence. If it is IMPOSSIBLE to illustrate the frame of the movie where space converts into objects with shape, then it is impossible to even imagine what it means for existence to be CAUSED. Causality implies that one object is influencing another. How can an object with shape cause another object to instantly appear from the void? The mechanism behind this magic cannot be illustrated.

When understood this way it's easy to see why your argument is circular: you have to presuppose the existence of an object which is capable of creation. If "universe" means "all matter and space," then the object capable of creation is PART of the universe. That means that the universe is not beginning to exist, but that some objects WITHIN the universe are beginning to exist. So the universe still has no beginning, it's just that some parts of it allegedly have a beginning. If you the theorist are incapable of illustrating the mechanism behind how an object can create other objects from the emptiness of space then your theory fails at explaining anything.

--- "Conceptual analysis of what it means to be the cause of the universe then aims to establish some of the theologically significant properties of this being."

This is a second failure of your theory. You cannot even illustrate the object allegedly responsible for the creation. As I stated initially, the onus is on anyone proclaiming belief or lack of belief in the "existence" of "God" to articulate what it means for "God" to "exist." "God" cannot be illustrated. "God" creating objects from nothing cannot be illustrated. The proposition that God created the universe is neither true nor false, it is IRRATIONAL, ie, meaningless to the point of being open to broad and subjective interpretation.

Conclusion: creation belongs exclusively to religion, especially any "theory" of creation involving objects which themselves cannot be illustrated
~ Jason Quinn
Posted by quedula at 08:31 No comments: 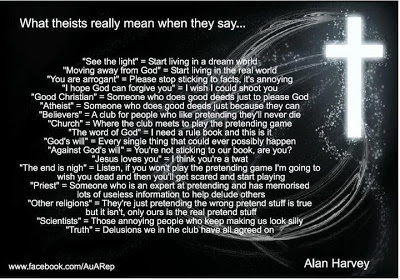 "Mr Sanderson said that the Thought for the Day controversy should be re-assessed as part of this review. He also called for the reporting of Robert Piggott, the BBC's religious affairs correspondent, to be looked at. Mr Piggotts's overly deferential approach to religious controversy brings many complaints to the NSS as well as the BBC.
The BBC's coverage of the papal visit in 2010 was a prime example of how the corporation gets it wrong in its approach to religious issues. The coverage was disgracefully fawning and wholly disproportionate. Opinion polls showed overwhelming apathy for the visit, making the wall-to-wall coverage over TV and radio completely unjustifiable."
Posted by quedula at 16:17 No comments:

"One reason that belief in the supernatural remains widespread, despite its negligibility, is that, as discussed earlier, it cannot be proven wrong, and the epistemological insulation provided by its inaccessibility is accorded the weight of evidence despite the fact that it carries no evidential weight at all. The supernatural remains logically possible, and thus an option for belief, only because it is not susceptible to confirmation or disconfirmation on the basis of evidence. But this status is permanent--the metaphysical status of supernaturalism as at most a logical possibility will never change. To become more than a logical possibility, supernaturalism must be confirmed with unequivocal empirical evidence, and such confirmation would only demonstrate that this newly verified aspect of reality had all along never been supernatural at all, but rather a natural phenomenon which just awaited an appropriate scientific test. Supernaturalists have not succeeded in providing such a test, but the naturalist has all the time in the world, and is prepared to give the supernaturalist all the time in the world, to make the attempt. In the meantime, the philosophical naturalist can point to the constantly expanding success of science in explaining what once were thought intractable mysteries or fixed categories of experience and reality." ~ Barbara Forrest, "Methodological Naturalism and Philosophical Naturalism: Clarifying the Connection" (2000)
Posted by quedula at 21:01 No comments: