An Arab on Arabs

An impressive analysis.
Posted by quedula at 20:04 No comments:

Why does God allow disasters?

The embarrassingly simple answer to the question "Why does God allow terrible natural disasters like earthquakes? is "Because he doesn't exist". Yet for centuries theologians have been tying themselves up in knots trying to find an alternative explanation.

When competing hypotheses are equal in other respects, the principle of Occam's Razor recommends selection of the hypothesis that introduces the fewest assumptions and postulates the fewest entities while still sufficiently answering the question. While this isn't  a principle of logic, it seems a good kicking off-point. What a pity theologians haven't spent their years of study first trying to answer the question "does God exist"? Perhaps they dimly sensed that this would quickly put them out of a job.
Posted by quedula at 13:38 3 comments:

"If we go back to the beginning, we shall find that ignorance and fear created the gods; that fancy, enthusiasm, or deceit adorned them; that weakness worships them; that credulity preserves them and that custom, respect and tyranny support them in order to make the blindness of men serve their own interests. If the ignorance of nature gave birth to gods, the knowledge of nature is calculated to destroy them."
~ Baron D’Holbach

1723 – 1789 Baron D'Holbach was a French-German author, philosopher, encyclopedist and a prominent figure in the French Enlightenment. He was lived and worked mainly in Paris. He is best known for his atheism, and for his voluminous writings against religion, the most famous of them being the System of Nature (1770). (From Wiki)
Posted by quedula at 08:26 No comments:


I love that little shrug he does at the end."That's how it is - take it or leave it"
Posted by quedula at 15:29 No comments:

In "split" brain patients the right-hand hemisphere believes in God, the left-hand doesn't. These findings have apparently raised hardly a ripple in the theological community despite raising the most challenging questions yet about the intrinsic nature of religious belief.
Posted by quedula at 08:24 No comments:

Originally intended to challenge the new blasphemy law which came into force in January, the exhibition has been somewhat overtaken by events. Owing to the effective campaign against the law the Justice Minister now intends to hold a national referendum to enable its repeal. This exhibition therefore has become somewhat of an early celebration of the principle of freedom of expression.
Posted by quedula at 14:32 No comments:

A believer recently told me they "respect" my lack of faith. I was distinctly underwhelmed by this. For one thing it seemed slightly patronising; for another you can't choose to 'not believe', its just the default position for anyone who insists on credible evidence before accepting a proposition as true. It seems to put non-belief and belief on opposite sides of the same coin. Believers would like to think this, but they are in fact on different coins, one critical thought, the other unquestioning acceptance.
Posted by quedula at 14:02 5 comments:

Jesus and the Raisins 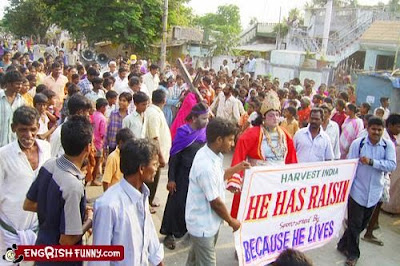 Evidently Jesus only copped for one raisin in paradise and came back for another try.
quedula's note: with regard to the five & twenty virgins promised to islamic martyrs the word "virgin" is widely thought to be a mistranslation for 'raisin".
Posted by quedula at 10:12 No comments:

Jesus in a Raincoat

Annual re-enactment of the crucifixion in Brighton 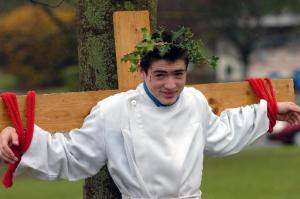 A torrential downpour did not stop a community gathering outside for an annual re-enactment of the crucifixion.

The congregation gathered on the green in The Avenue, Moulsecoomb, Brighton, for the traditional Good Friday event clutching soggy hymn sheets, with only umbrellas to protect them from the elements.Representatives from churches including St Andrew's, in Hillside, Mouslecoomb and the Salvation Army turned out for the service.

Matthew Burnham took his place on the cross to play Jesus.At noon he carried the cross on his back from St Andrew's Church to the tree on the green where the crucifixion story was acted out.

Father John Wall, who led the service, said: “I think it is the soggiest Good Friday that we have had but well done for turning out in what are pretty horrible conditions.“Because it's so soggy, we cannot actually use the electrical equipment to run the keyboard so I hope you are all going to be noisy.”


quedula is lost for words . . . . .
Posted via web from quedula's posterous