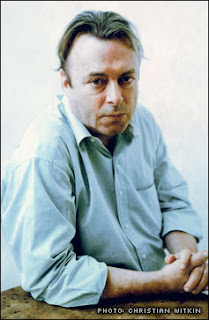 Nothing would have kept me from joining you except the loss of my voice (at least my speaking voice) which in turn is due to a long argument I am currently having with the specter of death. Nobody ever wins this argument, though there are some solid points to be made while the discussion goes on. I have found, as the enemy becomes more familiar, that all the special pleading for salvation, redemption and supernatural deliverance appears even more hollow and artificial to me than it did before. I hope to help defend and pass on the lessons of this for many years to come, but for now I have found my trust better placed in two things: the skill and principle of advanced medical science, and the comradeship of innumerable friends and family, all of them immune to the false consolations of religion. It is these forces among others which will speed the day when humanity emancipates itself from the mind-forged manacles of servility and superstition. It is our innate solidarity, and not some despotism of the sky, which is the source of our morality and our sense of decency.
That essential sense of decency is outraged every day. Our theocratic enemy is in plain view. Protean in form, it extends from the overt menace of nuclear-armed mullahs to the insidious campaigns to have stultifying pseudo-science taught in American schools. But in the past few years, there have been heartening signs of a genuine and spontaneous resistance to this sinister nonsense: a resistance which repudiates the right of bullies and tyrants to make the absurd claim that they have god on their side. To have had a small part in this resistance has been the greatest honor of my lifetime: the pattern and original of all dictatorship is the surrender of reason to absolutism and the abandonment of critical, objective inquiry. The cheap name for this lethal delusion is religion, and we must learn new ways of combating it in the public sphere, just as we have learned to free ourselves of it in private.
Our weapons are the ironic mind against the literal: the open mind against the credulous; the courageous pursuit of truth against the fearful and abject forces who would set limits to investigation (and who stupidly claim that we already have all the truth we need). Perhaps above all, we affirm life over the cults of death and human sacrifice and are afraid, not of inevitable death, but rather of a human life that is cramped and distorted by the pathetic need to offer mindless adulation, or the dismal belief that the laws of nature respond to wailings and incantations.
As the heirs of a secular revolution, American atheists have a special responsibility to defend and uphold the Constitution that patrols the boundary between Church and State. This, too, is an honor and a privilege. Believe me when I say that I am present with you, even if not corporeally (and only metaphorically in spirit...) Resolve to build up Mr Jefferson's wall of separation. And don't keep the faith.
Sincerely,
Christopher Hitchens
Posted by quedula at 09:13 1 comment:

4 minutes of enchantment.
Posted by quedula at 04:57 No comments:

Blood taken from John Paul to be used as relic

Fox News. Published April 26, 2011.
VATICAN CITY –  Blood taken from Pope John Paul II during his final hospitalization will be used as the official relic for veneration after he is beatified.
The Vatican made the announcement Tuesday, putting to rest questions about what relic would be presented during Sunday's beatification.
In a statement, the Vatican said four small vials of blood had been taken from John Paul during his final days for a possible transfusion, but were never used. Two of the vials were given to John Paul's private secretary, Cardinal Stanislaw Dziwisz, and another two remained at the Vatican's Bambin Gesu hospital in the care of nuns.
One of the hospital vials will be placed in a reliquary and presented Sunday; the other will remain with the nuns.
John Paul died April 2, 2005.
Is there no limit to the gruesome lengths these sick minds will not go to?
Posted by quedula at 09:25 2 comments:

"Jesus unambiguously preached mercy and forgiveness. These are supposed to be cardinal virtues of the Christian faith. And yet Evangelicals are the most supportive of the death penalty, draconian sentencing, punitive punishment over rehabilitation, and the governmental use of torture. Jesus exhorted humans to be loving, peaceful, and non-violent. And yet Evangelicals are the group of Americans most supportive of easy-access weaponry, little-to-no regulation of handgun and semi-automatic gun ownership, not to mention the violent military invasion of various countries around the world. Jesus was very clear that the pursuit of wealth was inimical to the Kingdom of God, that the rich are to be condemned, and that to be a follower of Him means to give one’s money to the poor. And yet Evangelicals are the most supportive of corporate greed and capitalistic excess, and they are the most opposed to institutional help for the nation’s poor — especially poor children. They hate anything that smacks of “socialism,” even though that is essentially what their Savior preached. They despise food stamp programs, subsidies for schools, hospitals, job training — anything that might dare to help out those in need. Even though helping out those in need was exactly what Jesus urged humans to do. In short, Evangelicals are that segment of America which is the most pro-militaristic, pro-gun, and pro-corporate, while simultaneously claiming to be most ardent lovers of the Prince of Peace."

Extract from an article by Phil Zuckerman on RELIGIOUSINTELLIGENCE.COM
Posted by quedula at 19:23 7 comments:

The God Who Wasn't There

This hour long film is now availible in full on Youtube. It is a 2005 independent documentary written and directed by Brian Flemming. The documentary questions the existence of Jesus, examining evidence that supports the Christ myth theory against the existence of a historical Jesus, as well as other aspects of Christianity.
Posted by quedula at 08:21 No comments:

An article by Jonathan Wynne-Jones of the Telegraph reports the views of Lord Patten, the new Chairman of the BBC. In a lecture last week he accused atheists of being "intolerant"" completely overlooking, apparently, the intolerance catholics show towards homosexuals and women.
The former governor of Hong Kong and current chancellor of Oxford University, who described himself as a cradle Catholic, said his own experience was that people looked down on him intellectually for having religious belief.
Richard Dawkins comments:-
"Looked down on him? Looked DOWN on him. Apparently they didn't look down on him enough to stop him being a cabinet minister, governor of Hong Kong, Chancellor of Oxford University, Chairman of the BBC Governors, Member of the House of Lords, and all-round one of the most successful and looked-UP-to men in England today!
His appointment now means that both the Director General of the BBC (Mark Thompson) and the Chairman of the Governors are practising Roman Catholics. You'd think he'd be delighted at this triumph of his religion, in monopolising two of the most influential positions in world media. What has he got to complain about?"
Richard
Posted by quedula at 05:11 2 comments:

If christianity had never existed . . . 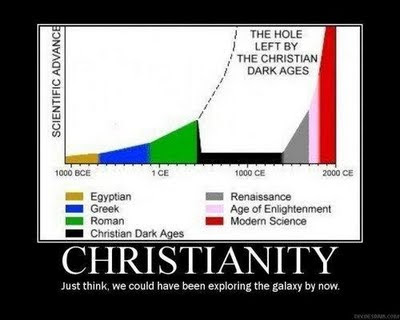 A short history of the Golden Rule

There’s a common misconception that the so-called Golden Rule is a Christian ethic, but the reality is that it originated long before - - - 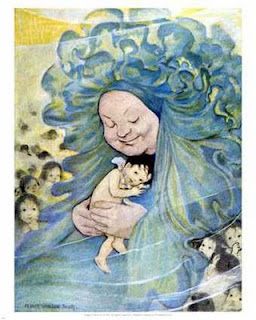 
1862 CE. "Mrs Doasyouwouldbedoneby" from the "The Water Babies" by Charles Kinglsey. Illustration by Jessie Willcox Smith
Posted by quedula at 09:04 1 comment:

Over millennia, legions of christian mind-benders have hi-jacked the period around the spring equinox for the celebration of their own gruesome beliefs and rituals. Yet, unlike Christmas, they have failed to impose on it, an English name of uniquely christian significance.

The etymology is complicated but 'Easter' is believed to have developed via Old English from the word for April, Eostur-monath, in the Germanic calendar; and the Venerable Bede reckoned that this was so named after the pagan goddess Eostre whose festival was celibrated in that month. Other, more recent,  linguistic scholars have identified the goddess as a Germanic reconstruction of the Proto-Indo-European goddess of the dawn, 'Hausos'. In short the name has its roots in pre-christian beliefs, and from ancient time customs associated with it, frequently involving hares, rabbits and eggs, have survived to this day.

With that clarification in mind we can wish each other a "Happy Easter" safe in the knowledge that we are not celebrating the image of a scourged, crucified body and its mythical resurrection, or by a process of tortuous, insane reasoning extracting some theological message from it;  but rather being glad that the earth is still rolling round the sun, that the season of growth and renewal is once again upon us, and that we are here to enjoy it.

"To have lived at all is a dream come true; to live in awe of the dream is cause to celebrate and revel in the wonder of Life and all its delicious bedlammy; from lovers spurned and fortunes lost to plots unbound and rivals crushed, let us bask in the splendifery and wallow in the mayhemble - be it good or bad, we celebrate Life!" ~ Marco Dodo


"At least you can fucking die and leave North Korea."

Billy Connolly - Religion is over

"You've had a couple of thousand years - and you've fucked it"
Posted by quedula at 15:01 No comments:


What a pleasant fellow! Aren't you US christians glad he's on your side?
Posted by quedula at 07:02 1 comment: 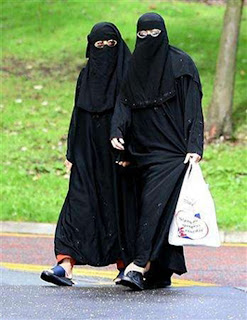 From a report in The Independent:-
"The prospect of any attempt to ban the Islamic full veil in public in Britain has been firmly ruled out by Theresa May, the Home Secretary.
Ministers believe there is little pressure, either politically or among the public, for the UK to follow the French lead and outlaw the use of face-covering veils such as the niqab or burka.
Although David Cameron has warned of "different cultures" being encouraged by "state multiculturalism" to live separate lives, the Government is adamant that to impose a ban on the veil would run contrary to British instincts. Calls for a ban have been limited so far to one Tory MP, Philip Hollobone, and the UK Independence Party. Mr Hollobone attempted last year to champion a Commons bill outlawing face coverings, but received no public declarations of support from any other MP.
The Home Office said yesterday: "It is not for government to say what people can and cannot wear. Such a proscriptive approach would be out of keeping with our nation's longstanding record of tolerance. Accordingly we do not support a ban on wearing the burka."
Baroness Warsi, the first woman Muslim Cabinet minister, has also defended the right of women to choose to wear a face veil."
A burqa ban does run counter to British instincts but it is not a matter of "tolerance", it is a matter of personal freedom. We should have the freedom to be intolerant of burqa-wearers just as they should have the freedom to go on wearing it.
Posted by quedula at 06:33 1 comment:

The shady origins of christianity . . .

The evangelical intent to bring children to God as expressed here is nothing short of criminally indictable child abuse – that it is permissible under the yoke of “religious freedom” is an abhorrent indictment of American society and an education system that allows home-schooling.
Jesus camp - the movie (2006)
Posted by quedula at 04:31 No comments:

Quotation of the day

"Although science and religion are said to be "different ways of knowing", religion isn't really a way of knowing anything – it's a way of believing what you'd like to be true. Faith has never vouchsafed us a single truth about the universe." ~ Jerry Coyne
Posted by quedula at 10:04 No comments: