God and the bible - a question.

According to believers God gave us the bible and he also created us with the ability to pick out the good bits that he really wants us to follow as distinct from the nasty bits that we shouldn't.  That is, he gave us the inbuilt ability to distinguish right from wrong, good from bad.

In that case why did he bother with the bible at all, and why do present day believers rate it other than as a work of fantasy literature?
Posted by quedula at 14:34 2 comments:

Tony Blair has been waffling away again, this time in Montreal, trying to big-up his ridiculous Faith Foundation.  Apparently McGill University has become involved in its "Faith & Globalization Initiative." I wonder why? Do its students know? I was going to read up about it but, unfortunately, found I was due to watch TV.
However in the Montreal Gazette article the following quote from his speech particularly caught my eye:-
"The single most important thing for people of one faith is to know about the others. The more you know and the less the ignorance, the less the fear of the other, and it's often the fear that creates problems."
The point he seems to overlook is that the more rational people learn about some faiths the more they fear them; not excluding the particular cult he favours.
Posted by quedula at 08:23 1 comment:

Contradictions in the Bible 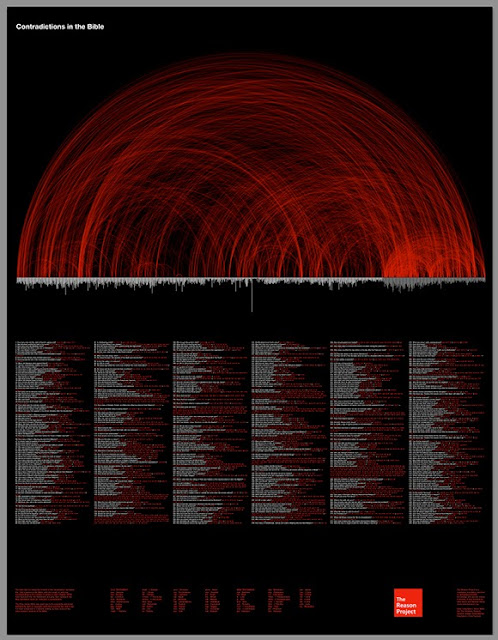 The bars that run along the bottom of the visualization represent the 1189 chapters in The Bible, with the length of each bar corresponding to the number of verses in each chapter. White bars represent the Old Testament and grey bars (to the right) represent The New Testament. Each red arc connects verses that contradict each other.
Wonderful!
Posted by quedula at 19:18 3 comments:

What passing-bells for these who die as cattle?
Only the monstrous anger of the guns.
Only the stuttering rifles' rapid rattle
Can patter out their hasty orisons.
No mockeries now for them; no prayers nor bells;
Nor any voice of mourning save the choirs, –
The shrill, demented choirs of wailing shells;
And bugles calling for them from sad shires.
What candles may be held to speed them all?
Not in the hands of boys but in their eyes
Shall shine the holy glimmers of goodbyes.
The pallor of girls' brows shall be their pall;
Their flowers the tenderness of patient minds,
And each slow dusk a drawing-down of blinds.
Anthem for Doomed Youth by Wilfred Owen
Posted by quedula at 15:34 No comments:

Causes of the Rise & Decline of Islam

Extract from a speech delivered by Marmaduke Pickthall in Madras,
India in 1927:-
"The Muslim empire revived after the attack of Genghis Khan and even made fresh progress. A progress so remarkable that once more it threatened Europe as a whole, and so aroused the old crusading animosity in modern dress, which was the secondary reason of its downfall. I say the secondary reason for the main reason for the downfall must be sought in the Shari'ah, among those natural laws which must always control the rise and fall of nations.
The empire was apparently progressing but it was progressing on the wave of a bygone impulse. The Ulama who sought knowledge "even though it were in China" were no more. In their place stood men bearing the same high name of  Ulama claiming the same reverence, but who sought knowledge only in a limited area, the area of Islam as  they conceived it - not the world-wide, liberating and light-giving religion of the Qur'an and the Prophet, but an Islam as narrow and hidebound as religion always will become when it admits the shadow of a man between man's mind and God.
Islam, the religion of free thought, the religion which once seemed to have banished priestly superstition and enslavement of men's minds to other men, forever from the lands to which it came, had become - God forgive us! - priest-ridden.
The pursuit of natural science had already been abandoned. All knowledge coming from without was reckoned impious. For was it not the knowledge of mere infidels? Whereas the practice of the early Muslims was to seek knowledge even unto China, even though it were the knowledge of a heathen race. The growth of pride accompanied the cult of ignorance.
The Christian nations, which had been moved to the pursuit of science by the example of the Muslims, had advanced materially just as the Muslims had advanced materially so long as they obeyed that portion of the Shari'ah or Sacred Law which proclaims freedom of thought and exhorts the pursuit of knowledge and the study of God's creation. The Christian nations threw off the narrow shackles of ecclesiasticism and espoused free thought, and their advance in the material field was as surprising in its way as were the conquests of the early Muslims in their way."
Posted by quedula at 11:37 2 comments:

Has Islam a cultural inferiority complex?

I was impressed with an article by The Times correspondent Matthew Parris, "Has terrorism become a weird kind of game", 6th November 2010. Here is an extract from it:-

"Islamists seem spellbound by high-tech and by electronics. While despising the Babylon they think the West has spawned, they are fascinated and impressed by its technological underpinnings, and crave this wizardry for themselves. They cannot build planes and would struggle to run an airline; but to be clever enough to bring down one of ours soothes what may be a deep-seated inferiority complex. To do it by suicide weaves elements of Muslim courage and piety into Western-style scientific mastery: a three-layered self affirmination."
Posted by quedula at 16:51 5 comments: