TAKE THE PLEDGE
Take the pledge!
Posted by quedula at 09:51 No comments:

Evidently Pat has some reservations about the burqa . . .
Posted by quedula at 05:33 2 comments:

Social networks dominated by the godless

"In our overly zealous religious society, many atheists have had a difficult time finding others who value reason over faith. While atheist communities are on the rise in most cities, atheists have created a disproportionably large community on the internet." . . .

It would seem logical to credit God with the rock fall that entombed the miners and thank the engineers for their eventual rescue.

Fools and their Follies

Those who advocate a piece of folly like the theory of an "intelligent creator" should be held accountable for their folly, they have no right to be offended for being called fools until they establish they are not in fact fools. ~ S T Joshi, author of "Atheism: A Reader".
Posted by quedula at 08:41 No comments:

Confrontation all the way . .

A taster from PZ's brillant address at the Secular Humanist Conference:-
"It's all about the truth, people. And all the evidence is crystal clear right now: the earth is far older than 6,000 years. Evolution is a real, and it is a process built on raw chance driven by the brutal engines of selection, and there is no sign of a loving, personal god, but only billions of years of pitiless winnowing without any direction other than short-term survival and reproduction. It's not pretty, it's not consoling, it doesn't sanctify virginity, or tell you that god really loves your foreskin, but it's got one soaring virtue that trumps all the others: it's true."
Posted by quedula at 07:39 1 comment:

A vicar is hoping to turn “weak-willed” offenders from crime to Christ.

The Reverend Dr John Scott will be giving two talks to drug addicts and ex-offenders in Brighton to try and turn them to the light.

Mr Scott, who is the chief executive of the charity the Daylight Christian Prison Trust, said that addicts and criminals were weak-willed and needed to let Jesus into their lives to find the strength to go on the straight and narrow.

He said: “People can't change by good intention. It takes strength they don't have.

"We’ve had a number of uplifting cases of criminals whose lives have been totally changed because they found a source of strength greater than any other - belief in Jesus Christ.

“We talk tough when we speak to addicts and offenders. We know that when you're a habitual addict - hooked on crime or drugs - it takes courage to make the move. But addicts know in their hearts the addiction doesn't give them any real, lasting pleasure in life. Lasting change comes through turning to Jesus Christ, drawing upon his strength to change, living with hope for the future.

“God helps them because it gives them the spiritual commitment to keep going."

Presumably the Reverend Scott is increasingly finding that it is only the weak-willed who can be persuaded to believe his fairy tales.

The British Humanist Association has launched a campaign in advance of the 2011 census which is only five months away. The concern is that the 2001 census gave inaccurate results because of the leading nature of the religion question. The aim of the campaign is to get everyone to think carefully of the implications before answering the voluntary question on religion next year.

For further information see the Campaign website.
There is also a Facebook page. You can also donate to help finance publicity about this important issue. 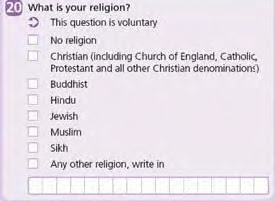 This was the voluntary question posed in the 2001 census. It is generally considered to be somewhat of a leading question, even though the first tick box allows selection of "No religion", this is not strictly a logical answer since "No religion" is not a religion.  This is  immediately followed by the "Christian" option and it is thought likely that in 2001 many people naively identified themselves as "christian" because they had been told that is what they were when young and had had the idea reinforced by schooling and being told at intervals throughout their lives that they lived in a 'christian' nation. This is not at all the same thing as believing in an invisible magic friend and regularly attending and financially supporting a church.  This is clearly indicated by the vanishingly small figures for church attendance and the many churches being closed, demolished or put to other uses. 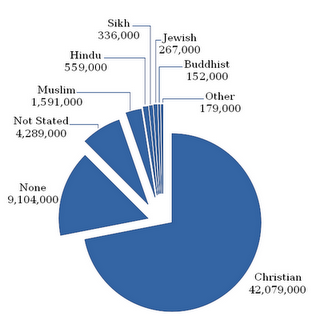 This anomaly produced the result that over 42M people declared themselves as belonging to the christian faith and the government uses these results  to justify diverting taxpayers money to faith schools and other religious groups: and the BBC to justify using licence fees to fund a disproportionate amount of religious programming.
In 2011 British citizens will have the first opportunity since 2001 to make clear the extent of their religiosity yet, notwithstanding strong representations by the British Humanist Society and the National Secular Society it is believed the question will remain unaltered.

We are all aware that christianity has had significant influences on our history and culture but we are where we are and, if we believe that, in the modern world, religion can be a dangerously divisive influence, the answer to the religion question should be clear.

Read an NSS article on this subject.
Posted by quedula at 16:48 No comments:

US judge asks Vatican to serve court paper to pope.

"MILWAUKEE — A federal U.S. judge is asking the Vatican to cooperate in serving the pope and two other top officials with court papers that stem from decades-old allegations of priest sexual abuse in Wisconsin.

The request is an incremental step in a lawsuit that accuses the officials of conspiring to keep the allegations against a Milwaukee priest quiet." 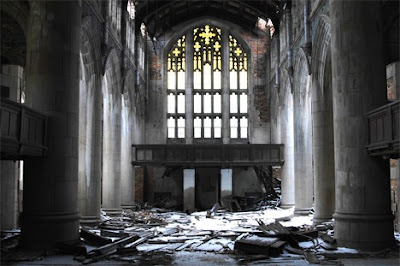 Church in Gary, Indiana abandoned in the 1970s due to poor attendance.
Photo: CityEyesPhoto.com
Posted by quedula at 19:11 No comments: