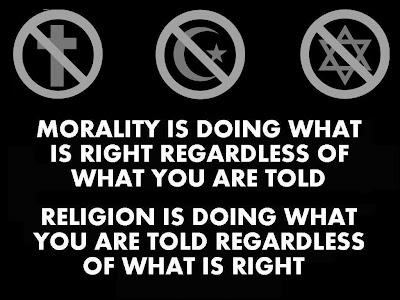 I think this blog has come of age. It has just been spammed by David Mabus.  (See comment to previous post.)

Deeply deranged, disturbed individual who believes James Randi has cheated him out of a million dollars, and who vents by spamming websites and email with his angry tirades. Certifiable. Needs immediate mental health care. His real name is Dennis Markuze, and he lives in Montreal, Canada."

Best Wishes for a Gladsome Yule 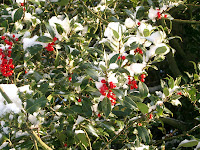 . . from the NSS President, Terry Sanderson which seems worth the widest possible UK readership:

This is the time of year when, if even for just a few hours, we can relax and withdraw from the conflicts and frustrations of day to day life. Religious people will tell us it is a wonderful opportunity to sit down and give thanks for the birth of Jesus and Christianity.

But that isn’t always a welcome message, as Christianity begins to show its true face again after a few decades of relative peace and quiet. Once more we can see the intolerance, bigotry and irrationality. These are the real traditions of Christianity, not the soppy sentimental stories that are fed to children in our schools.

Because of the appalling pronouncements and behaviour of “faith leaders” (particularly Pope Ratzinger and his many imitators) more and more people are coming to the conclusion that maybe the birth of Christianity wasn’t, after all, the best thing that ever happened to the human race. Instead, Christmas has become a de facto secular festival.

Already we are being told that half the population is “considering” going to church this Christmas* This happens every year, as the religious propagandists try to convince us that we are still a church-going nation. After the holiday it is usually revealed that something less than 5% actually showed their faces at (a C of E) church over the holiday **. The population of this country prefers to spend its time in the more wholesome atmosphere of home, where true loving feelings reside.

But despite this wholesale rejection of traditional organised religion by the people, the churches are now wielding temporal power the likes of which they have not dreamed of since Victorian times. Faith-based welfare, a religion-dominated education system, millions of pounds poured into suspect religious groups, exemptions from progressive equality and Human Rights legislation – this is religion at its self-serving worst, and most compassionate people detest it.

Opposition is building slowly, but it needs to get itself organised.

We know that there are many people who support the NSS’s aims and objectives, but who don’t join. For instance, people who subscribe to Newsline far outnumber those who commit to membership of the NSS.

And yet, unless these people who often feel passionately about the unwanted encroachment of religion into our lives make the commitment to get organised, the religious steamroller will continue on its journey to flatten our choices and restrict our autonomy.

These last few weeks have seen a huge propaganda push by the religious to firm up their position in the political life of this country. The media seems happy to go along with this, apparently on the assumption that because a few strategically placed bombs in London traumatised the nation for a while, we are all suddenly of the opinion that religion has revived and is at the centre of everyone’s life.

While we know that the traditional places of worship – the Church of England and the Catholic Churches - are declining rapidly, further evidence has emerged this month showing that immigrants are importing their own brands of religion into Britain. They generally take their faith more seriously than the “I’m spiritual but not religious” brigade that makes up the majority of the population in Britain (or the “fuzzy faithful” as they’ve been called).

Muslims from Pakistan and India, Catholics from Poland and evangelical Protestants from Africa and the Caribbean are bringing with them unpleasantly conservative religious beliefs that sometimes shock and repel the majority. They often seem primitive, hysterical, fanatical and alien, full of hatred and intolerance and crazy, senseless rules. Honour killings, violent, sometimes fatal, exorcisms, denial of medical treatment to children on the assumption that prayer will be sufficient, the treatment of women as chattels and the spouting of unvarnished hatred of non-believers, gays and Jews from the pulpits of mosques.

These new religious enthusiasts are still a relatively small minority, estimated at the 4.5 million mark. Among the mainstream population the move continues from indifference to religion to outright hostility to it. Look at the responses to this BBC forum which asked whether religion should be kept out of politics.

The majority of respondents think categorically that religion and politics should be kept well apart, but they do little more than express opinions on internet forums. Meanwhile, the small band of determined believers insinuate their way into ever more aspects of our lives.

The BBC forum question was sparked by comments from the Archbishop of Canterbury in an interview with the Daily Telegraph. In it, Williams said: “The trouble with a lot of government initiatives about faith is that they assume it is a problem, it’s an eccentricity, it’s practised by oddities, foreigners and minorities. The effect is to de-normalise faith, to intensify the perception that faith is not part of our bloodstream.”

He seems to imagine that it is the duty of MPs to put their “faith” at the forefront of their politicking as though it were inevitably a good and benign thing. But as we are increasingly seeing around the world, when religion inserts itself into politics and bids for temporal power it can be repulsive in the extreme. There is an inevitable self-serving quality about religion in politics, and whenever it gains a foothold it isn’t long before demands for privilege ensue and eventually the brutality begins.

But anyway, Dr Williams is completely wrong about this Government. It appears to have developed a kind of religious mania and fallen for this idea that really, underneath all their Godlessness, the British people are really pious and holy. We had hoped that lunacy had gone with Holy Tony, but apparently zeal burns ever brighter at Number 10.

A couple of weeks ago, Gordon Brown organised a tea party at Downing Street for 100 “faith leaders”. At it he said: “I don’t subscribe to the view that we are a secular society and that there is a naked public square. At the centre of our society is a belief that faith has a role in legitimate public debate. There may be controversy over individual issues but Christian values are at the centre of national life.”

The happy clappies present at the meeting then gave up their hallelujahs, and the Reverend Nicky Gumbel, founder and leading light of the evangelical Alpha Course, demanded that everyone present pray for the Prime Minister’s success at the Copenhagen Summit. (Among those present at the shindig was the self-professed atheist, communities minister John Denham who I am sure was happy to pray along with the many and various men of the cloth who were gathered around him, even though he apparently doesn’t believe a word of it. Reportedly he was not the only one squirming at being ambushed into evangelical prayer by Mr Gumbel).

The Reverend Steve (Mr faith-based welfare) Chalke who was, apparently, not at Downing Street on this occasion is, nevertheless, a familiar figure at Number 10. He spends a lot of time there negotiating the Christian takeover of our social services and an expansion of “faith-based education”.

His Oasis Trust has eleven academies in the bag with more in development and, as he will tell you, they have open admissions arrangements, so anyone can attend. However, I am not sure what Hindu, Sikh, Muslim and atheist parents think when they read that the ‘ethos’ of these schools is inspired by the “person and life of Christ”. Can someone explain to me why the taxpayer is shelling out tens of millions of pounds for Mr Chalke to tell captive children that their life is incomplete without Jesus?

The Tories promise even worse, with their Religious Rump already being described as the Tory Taliban.

The NSS’s policies are definitely in line with majority thinking and yet we are unable to get people in large numbers to join together to protect their own principles and rights. Consequently, the religious organisations have no problem raising large amounts of money, bringing together their troops when needed and bringing heavy influence to bear on politicians.

If we are to stop this minority running our lives we really are going to have to unite and make a commitment to pushing back the tide of reaction that religion brings with it. You can join the NSS online or by post with a cheque to NSS, 25 Red Lion Square, London WC1R 4RL.

Why not make it your New Year’s resolution to commit to your own principles and do something more than writing to internet forums about it?

We awaken this morning to advance snippets from a forthcoming interview with TB about his religious beliefs. One wonders if, in advance of his appearance at the Chilcot enquiry, this interview is very wise. He appears to be digging himself ever deeper. He is laying open his position and exposing it to early dissection and allowing the preparation of highly tuned questioning. The full interview is due to be screened tomorrow on BBC1 which many of us will watch with great interest. But, subject to that, here is what we have learnt so far:-

As the British don't approve  of invading foreign countries unless their own security is threatened TB would have known that his only chance to carry his case with the Cabinet and parliament  would have been to concentrate on the WMD. As to the stability of the region, perhaps a country gets the leaders it deserves and a ruthless tyrant such as Saddam was the only option for keeping the lid on the seething internecine tribal rivalries; as witnessed by the post-war violence.

And so, in the admitted absence of any perceived instructions from an Imaginary Magic Friend he took on himself the decision of what was best for the thousands of unconsulted men, women and children who were thereby inevitably condemned to be killed, maimed, and have their property destroyed.

Surely these life & death decisions are those that religious believers usually reserve for their IMFs. Christian believers in particular adopt a range of positions from outright pacifism to the use of minimum force required to prevent greater evils. The greatest evil to come out of Iraq War was the death of the innocents. Thousands are gone who would otherwise have been alive, perhaps not under an ideal government but with at least hope of change; and the best way to help them would have been to work slowly behind the scenes to weaken Saddam's sway or just be ready for his eventual demise.

One is forced to the conclusion that TB believes he is somehow entitled to act in loco deus, and the sincerity of his "faith" is  highly suspect.

If you are an atheist and you still enjoy celebrating Xmas, at least you know its because you were conditioned to like it as a child, with presents, stockings, christmas trees, and nice food.
Of course this isn't the same reason for christians at all. (Or so they will insist)
Posted by quedula at 14:48 No comments:

A Question to Tony Blair 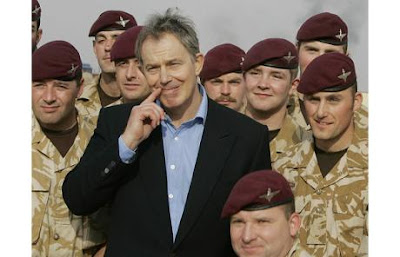 You are purported to be earning £15M per year from consultancy and lecture fees. It would be interesting to know how much of this you are donating to help the war-injured children of Iraq.
A figure such as £14,999,999 would seem appropriate.